What is Readers' Theatre?

Readers Theatre is a group reading activity. In some forms it also involves dramatisation. Its origins go back thousands of years to the oral tradition of story-telling in ancient Greece. In the 1950s and 1960s it was a recognised form of theatre in the USA and England with, for example, productions on Broadway and by the Royal Shakespeare Company. It later spread to colleges and schools, where it was considered to have an enormous potential both in mother tongue and foreign language classrooms.

The traditional model of Readers Theatre has a number of variants, but in principle the readers sit or stand in a row or a semi-circle. This model combines reading aloud with dramatisation, but makes a clear distinction between the two. Some pupils read aloud, while others dramatise scenes that complement the reading. The reading and dramatisation never take place at the same time.

The traditional model variant presented here was introduced into Norway in 1984 by the late Professor Leighton Ballew, who was a guest of Sogn og Fjordane Teater at the time. I worked on a Readers Theatre project with him, which was a collaboration between the Theatre and local schools.  In Ballew’s model seven readers sit in a semi-circle. One of the readers is called the ‘narrator’, and sits in the middle. The readers read very small units of a text, often a line or two, in a fixed order, until the whole text is completed. Figure 1 shows how the readers are organised in this model: 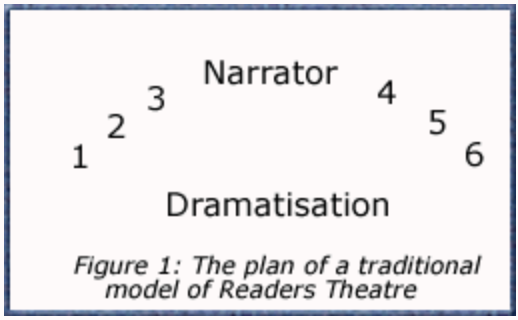 The reading always takes place in the following order: Narrator, 1, 6, 2, 5, 3, 4, Narrator, and so on. The Narrator always starts and finishes a reading sequence. Ballew stressed that Readers Theatre was an activity for all pupils, not just the best readers. The fact that very small units of text are read at a time make the reading manageable for pupils of all abilities.

Narrator: A long time ago, a miller lived with his daughter in a kingdom.

1  His daughter was very beautiful.

2  The king was out riding one day and saw the miller’s daughter.

3 “She’s more than beautiful” answered the miller. “She’s also clever. She can turn straw into gold!”

4  “That can’t be true?” said the king. “No one can turn straw into gold? Come to my castle tomorrow with your daughter. I want to see for myself.

Narrator: Well...OK,” said the miller. Now he was nervous.

In the developed model of Readers Theatre all participants ‘read’ parts of the text, but a distinction is made between ‘narrators’ and ‘characters’. There are no dramatised scenes, but readers who read the role of characters are free to move around the room, sit and stand and, for example, to use body language as they read. The same character is always read by the same reader. Those who are narrators usually place themselves in one fixed place in the room. For example, if there are four narrators, each one may place themselves in a corner of the room.

The beginning of the ‘Rumpelstiltskin’ text would look as follows if it were presented as a developed model of Readers Theatre. There would be four narrators and four characters: the miller, the king, the little man and the miller’s daughter.

Narrator 1: A long time ago, a miller lived with his daughter in a kingdom.

Narrator 2: His daughter was very beautiful.

Narrator 3:  She was kind, but shy girl.

Narrator 4:  The king was out riding one day and saw the miller’s daughter.

King:  “What a beautiful girl!”

King:  “That can’t be true!  No one can turn straw into gold? Come to my castle tomorrow with your daughter. I want to see for myself.”

Readers Theatre incorporates a number of teaching objectives, which may be summed up as follows:

Aaron Shepard’s website (http://www.aaronshep.com/rt/index.html) contains a good deal of information about Readers Theatre, as well as a number of free texts that can be downloaded.

The traditional model
The teacher adapts a text for Readers Theatre. The text is typed into a word document in small fragments, divided among the readers and the Narrator, as in the given example of ‘Rumpelstiltskin’. It is basically up to the teacher to decide how large the fragments are, but usually a fragment should be no more than two lines. The teacher also decides which scenes are to be dramatised and makes sure these are available separately for those involved in the dramatisation. Those involved in the dramatised scenes should also be given a copy of the reading part of the text, so that they know how their contribution fits in with the whole.

Assuming that the teacher has a text adaped for Readers Theatre, the following procedure should be followed. The assumption is that in a large class, different groups of pupils will be working with different Readers Theatre texts, both with respect to rehearsing them and presenting them to the rest of the class.  The text of ‘Rumpelstiltskin’ will here be used to illustrate the preparations for using the traditional model of Readers Theatre, but the principles apply to any other text for which this model would be used.